Mohammed Abdi and his family wanted to share their story with you and thank everyone who has so kindly helped them. These are his words.

I am writing this from the apartment that lovely Maria and Antonia found for us. It belongs to the Vaggeli family, who have so generously let us stay here free of charge, in a village near Idomeni.

I cannot express the relief I feel that my wife, Nalin, can give birth here and not in the camp at Idomeni; the relief that my daughters are now safe, away from bombs, away from dangerous people and away from the camp. We both want to express our deepest gratitude to everyone who has helped us. You are so many!

This is our story about our flight from our village in Syria; the Kurdish village of Hasaka. It was a beautiful place before the war. I had a good job as a satellite technician, and I could provide for my family.

We left Syria because it was becoming more and more dangerous day by day to stay there. The bombing was happening daily when we left, the infrastructure has broken down, there is no work, no future, and you do not know who is your friend and who is your enemy.

My brother-in-law, Azer, was a mini-bus driver and a very lovely and kind man. Daesh (Isis) made a road stop and said they wanted to check his bus. Instead they put a bomb inside so that he would drive back to our village. The next day strangers came to our house. They had so kindly gathered up all the small pieces of his body in a bag to return to us. I am sorry to describe this. I just want everyone to understand the situation in Syria.

It was a difficult decision to start on this journey, because my wife, Nalin, is sick and pregnant. The doctor in Syria said she is at risk of developing cancer. At the end of the day, we just had no choice. My wife and I were also scared for my daughters’ safety and future. My daughters, Hewler, Helin and Ruken are 11, 9, and 7 years old.

For all these reasons we sold our house for less than half of what I paid for it, and we left Syria just in time. Every one wants to leave Syria but all the borders are closed now. Many are stuck there. It’s so dangerous there it is hard to describe. Between Syria and Iraq the border is also closed now. Between Syria & Turkey the border is closed too now. Syria now like a big prison for everyone there, believe me. There is no future. My sister’s daughter made it with us to Turkey. She is still stuck there. We are worried about her.

We packed our bags and drove by car to the Iraqi town of Erbil where we met with smugglers. We drove for about one and half hours with them to a village on the border of Iraq and Turkey.

From here we drove about four or more hours to a river. We had to change jeeps 4 times because the smugglers were very scared about being caught. They said their work is very dangerous and there is a lot of security check points around the border.

The last jeep we were in broke down three times in a difficult area in the mountains. They fixed it temporarily so we could continue, but the car was not safe on the road, which was muddy and snowy and very slippery. So we begged them to stop the jeep and not continue as it was getting dangerous, but they refused. We all cried, I swear even I did. I felt so frustrated and angry. My family’s safety was at risk. I said to Nalin that I wanted to punch them, but she wisely told me to stay calm as they would probably just kill us all if I caused any problems. She said to me: ”Look Mohammed, they are three men with rifles and you are just one!” It was horrible. Thank god we finally reached the river. 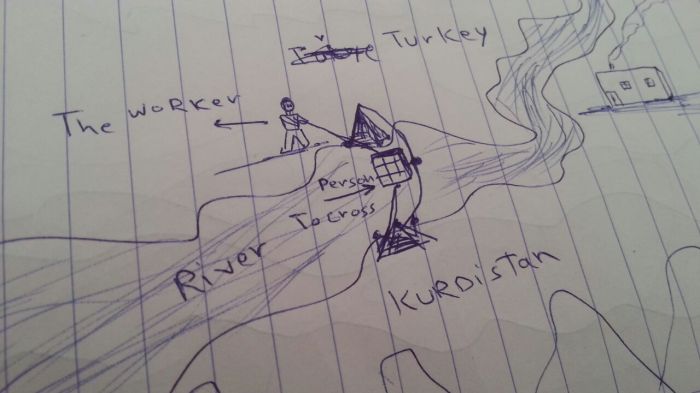 Sketch of crossing the river in an ‘Airbox’

We waited to cross the river with other people the smugglers were helping. There was a rope across the river in a large ”air”box that could hold one person at a time. It’s a sort of closed box that you climb in and then a lid is secured on top. So you are stuck in the box. If it falls into the water you are stuck inside. The river was not wide but the current was very strong. A young boy drew the box to the other side. The whole set up was very, very dangerous. We were all extremely scared. 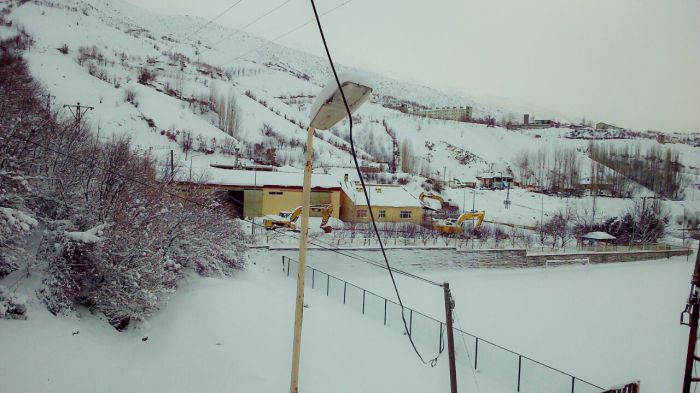 At night the mountains are not safe.

When we got across the river we start walking up a mountain. It was very cold. It was snowing. My girls were incredibly tired. Nalin, my wife, is pregnant. So many times she said to me: “Please, please Mohammad I am very tired, I have to stop.” But I answered that she must not stop because there are very bad people and wolves in these mountains. It was terrible walking in the darkness after the sun set. It made me cry in my heart to see my wife and daughters so tired. But we couldn’t stop, we had to stay as a group, and pass the mountain. We just could not stop. I will never forget that moment. We walked for 15 hours without stopping, carrying a few belongings with us.

At last we arrived at a bridge where there were Turkish police. They took us all into a big room where they wrote down our names. There were about 75 Syrian people. We were allowed to sleep there the night. We were all very exhausted.

The next day we were taken to a basketball stadium in another city, Shemdinli. There were about 400-500 people there. We stayed here for 7 days. Finally, after waiting for 7 days, not knowing how long we would be there, the police brought papers and called our names one by one, and let us go.

We went to Izmir by bus. The bus from Shemdinli to Izmir takes 23 hours (46 hours return), and we took the bus every time we tried to get on a boat in Izmir, to go to Greece. We had to go forth and back three times, it was only the third time we got on the boat. The first time the police caught us but let us go the following day. The second time we went to Izmir, the smuggler did not answer the telephone when we arrived, as promised. The third time we finally got across the sea to Samos, in Greece.

I can’t describe what it was like in the boat. We know that so many people have drowned, but we were really lucky to make it to Greece. The smugglers crammed 109 people in to a wooden boat that was probably made for just half as many passengers. They said that we were only 75 (which even that was too many) as they did not count babies and children up to 11  years old. Can you believe it, the young children don’t count! They only charge half price for them as well.

Until today we have been travelling for two months since we left our village, on foot, by car, in busses and jeeps- and on that small boat. My girls have been very brave. It has not been easy. We arrived on the shores of Greece so exhausted but just glad to be alive and had made it that far. We had to leave our belongings in Izmir when we got on the boat, so we had nothing left with us. In Greece, we went to Idomeni, which is next to the Macedonian border, with the hope of continuing our journey to the EU to apply for asylum somewhere.

Some of the tents in the camp at Idomeni

The Idomeni camp is very difficult. My wife was nine months pregnant when we arrived at Idomeni. We were very scared that she would have to give birth there, with no shelter, and no help.

We had run out of money to move elsewhere.

The smugglers took 850 US dollars to get us from Iraq to Turkey. From Turkey to Greece it cost us 7 600 US dollars. It cost loads more for other transport. I got some money from selling our house. Only 5 600 US dollars, a fraction of what it was worth before the war, and less than half of what I paid for it. Now we have no money left at all. No house. No country. No family. And nowhere to go. We don’t know when this tragic story will stop and when EU will find a solution for us. We are not tourists, not terrorists, just refugees who were forced to leave our country. We are just people like everyone else.

This is the story of our journey from Syria to Greece. I hope that everyone will know that the people who have fled Syria are normal citizens.

We are so happy that you have helped us. You are a group of angels – all of you. Because of you all we now feel like human beings again. You have made this possible for us. We don’t need much. Just to feel human is important.

This photo was taken in Syria

The whole family – out of the camp at Idomeni and safe in the new apartment!